In 1970, a group of 50 people formed a new Reform congregation in Columbia, MD, that became Temple Isaiah. Under the presidency of Barry Sklar, the temple conducted High Holy Day services and a portable ark was used for worship services held in members’ homes. The temple was provided rabbinic services by Rabbi Richard Sternberger of the Union of American Hebrew Congregations. Michael Levinson, the second president of Temple Isaiah, began a search for a permanent spiritual leader and Rabbi Stephen Fuchs became the first full-time rabbi of Temple Isaiah in 1973.

Temple Isaiah began holding regularly scheduled services in 1973 during Michael Brunner’s presidency. By 1974, services were held in the Wilde Lake Interfaith Center. The first Confirmation class was instituted in 1974 during Shirley Amster’s presidency. During this period, the congregation published its first newsletter and purchased a Torah. 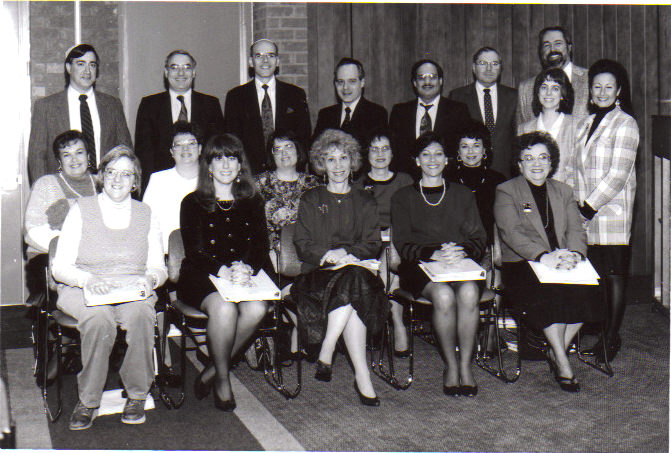 In 1975, during Joel Broida’s presidency, the congregation adopted Gates of Prayer and the temple’s choir was formed. Soon after, the temple moved to the Meeting House in Oakland Mills. During Gene Klein’s presidency in 1976, the fourth Friday night service was geared toward the interests of pre-B’nai Mitzvah youth.

During Dick Goldberg’s presidency, the temple hired its first part time employee, a secretary. The first adult B’nai Mitzvah class was formed, a Sisterhood began and a capital fund was started to assist the congregation in planning for its future space needs. In 1980, Lynne Warshaw worked out the details of Rabbi Fuchs’ sabbatical, the first sukkah building contest was held and the congregation hired a Bar/Bat Mitzvah tutor.

When Fred Berko became president in 1983, the congregation revitalized the choir, reinstituted the Sisterhood and formed a Men’s Club. Richard Solomon was named regular cantorial soloist. The Confirmation class went to New York for the first time and the congregation sponsored its first trip to Israel. 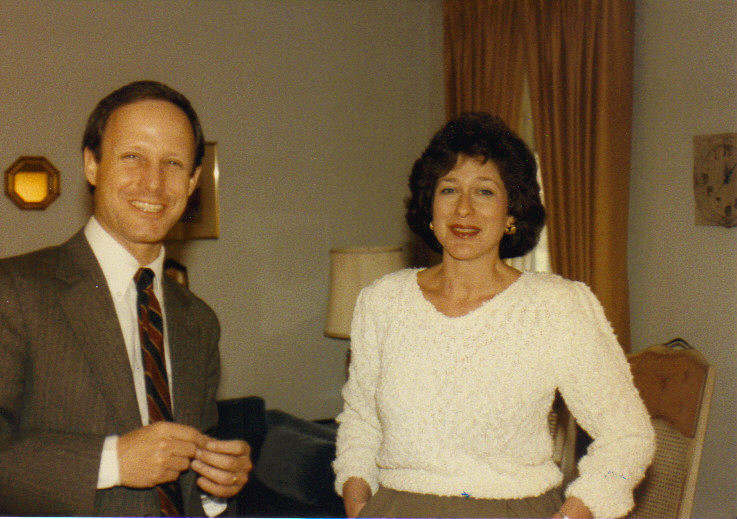 During Marion Miller’s presidency in 1985, Rabbi Fuchs accepted a pulpit in Nashville, TN. After five months of meetings and interviews with almost 20 candidates, the Rabbinic Selection Committee unanimously recommended the appointment of Rabbi Mark Panoff as Temple Isaiah’s new spiritual leader. Temple Isaiah joined with the Columbia Jewish Congregation to form a bi-congregational Hebrew school and Temple Isaiah signed a new lease with the Meeting House which enabled the congregation to build an addition for the temple to use.

During his presidency, Robert Dubin presided over a smooth rabbinic transition. The congregation constructed and decorated the temple’s new suite of offices and chapel. A Scholar-in-Residence Program and Torah study group were instituted by Rabbi Panoff.   Rabbi Panoff also served as leader for a group of 80 congregants as they journeyed on Temple Isaiah’s second trip to Israel.

Jeanne Krips Tobin assumed the presidency in 1988 and guided the congregation through an evaluation of its needs, practices and goals. The congregation’s first family from the Soviet Union arrived in 1989, and as a result, the congregation assisted in the settling of over 100 Soviet Jews. In recognition of the congregation’s efforts, Temple Isaiah received the Union of American Hebrew Congregation’s Fain Social Action Award. Our first Tu’Bshvat Seder was held. 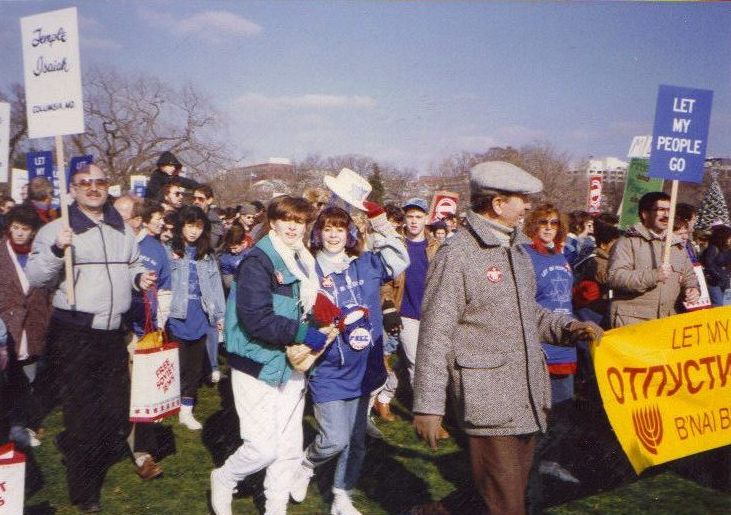 During Les Feldman’s presidency, the congregation commissioned a new Torah, expanded adult and youth education programming and organized active junior and senior youth groups. The congregation voted to start the Temple Isaiah Religious School. Rabbi Panoff wrote a curriculum that received the praise of Reform educators, and Hana Bor was selected to be the Educational Director of the School.

In 1992, during Margery Rapport’s presidency, the Temple Isaiah Religious School officially opened with 400 students. Rabbi Panoff took a mini-sabbatical during which time he volunteered at Temple Sinai in Wellington, New Zealand. Lay leaders and guest rabbis conducted services and area rabbis provided the necessary emergency services during his absence.

Susan Wakshul’s presidency marked the culmination of efforts related to strong fiscal responsibility. Susan appointed a Building Feasibility Committee to explore the benefits of remaining at the Meeting House and the utilization of the temple’s space.

Donna Kaplan served as president from July of 1996 through June of 1998. Joel Friedman & Associates was hired to do a financial feasibility study to determine if the congregation could raise the necessary funds to purchase land and build its own free-standing facility. As a result of the study, the congregation voted to begin a capital campaign. Don Gartner, a professional fundraiser, led a capital campaign during which $1.9 million was pledged for the new synagogue.  Also, during Donna’s term, Rabbi Panoff received an honorary Doctor of Divinity degree for his 25 years in the rabbinate. 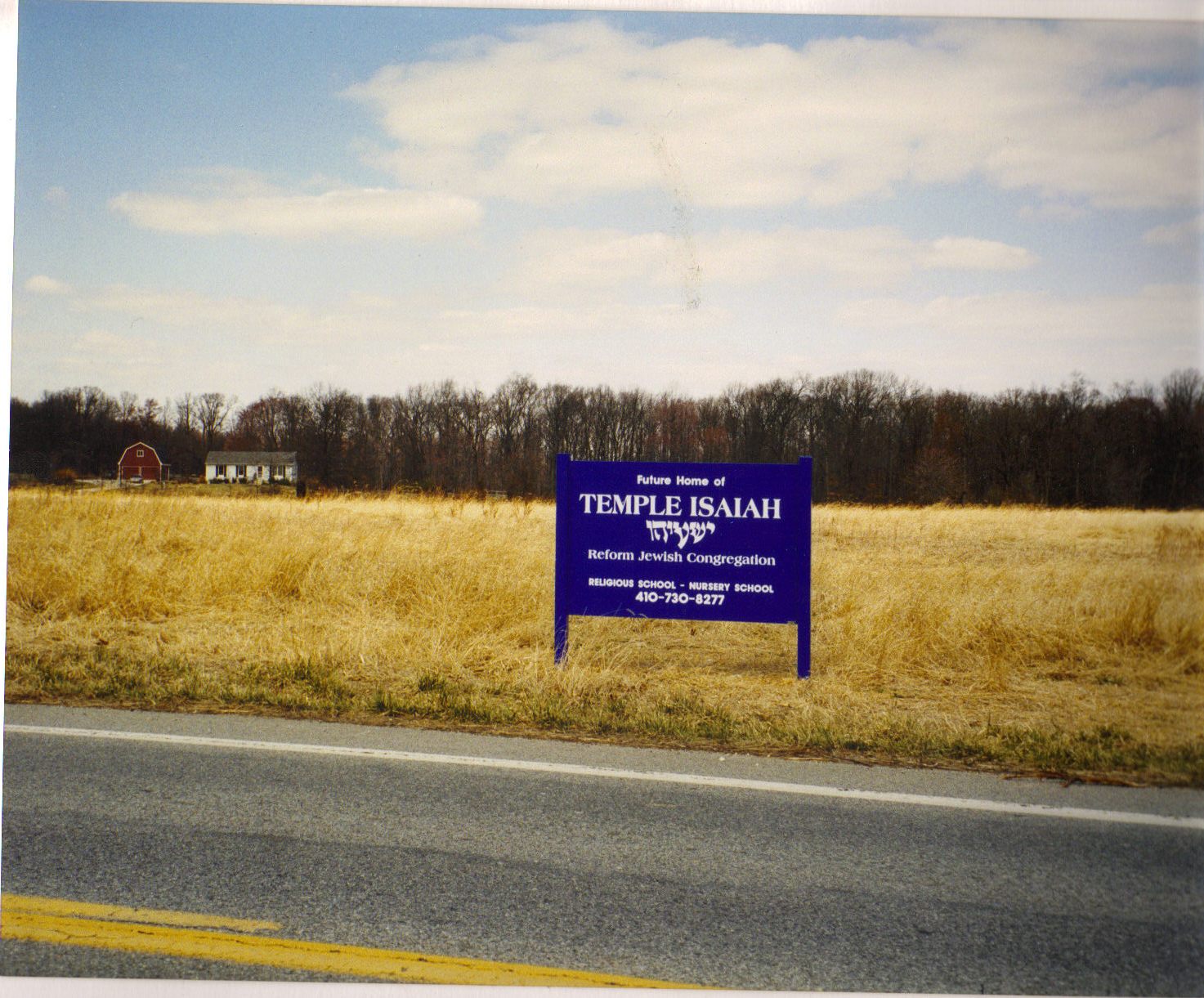 Cindy Ward Sandler was president from 1998 to 2000. These years were a time of transition and growth. One day, Art Pertman called Cindy to say that he had found a beautiful piece of land containing a stream and trees. This piece of land turned out to be the grounds for the new temple building on Route 216. The first building committee began to examine the synagogue’s needs and how to best address them. With the Temple’s growth, Cindy assisted the office with staff development. Cindy coordinated the celebration of Rabbi Panoff’s 13th year with Temple Isaiah.

One of the most exciting events of Moira Larsen’s presidency (2000–02) was the purchase of the land for the building. Also during her tenure, Temple Isaiah’s cantorial soloist of 28 years, Richard Solomon, retired. Moira oversaw the interview and selection process that brought a professionally trained soloist, Judith Daniel, to the congregation. A new auxiliary organization to enrich the Jewish lives of Temple Isaiah’s women, Kol Nashim, began. Moira oversaw the smooth transition to Marge Gold’s directorship of the religious school and its growth to 500 students.

The most significant accomplishment of Lynn Abramson’s presidency (2002–04) was the construction and completion of the new building. The facility is 27,000 square feet on a 20-acre site that serves as a campus for Jewish life and affords the congregation ample opportunity for future development. Along with this milestone came the establishment of Temple Isaiah’s Preschool, with Renee Panoff as the founding director providing its vision. Many new administrative issues, financial concerns and congregational policies had to be addressed and implemented for the first time. During Lynn’s term, Religious School enrollment and congregational membership grew to reach all-time highs. 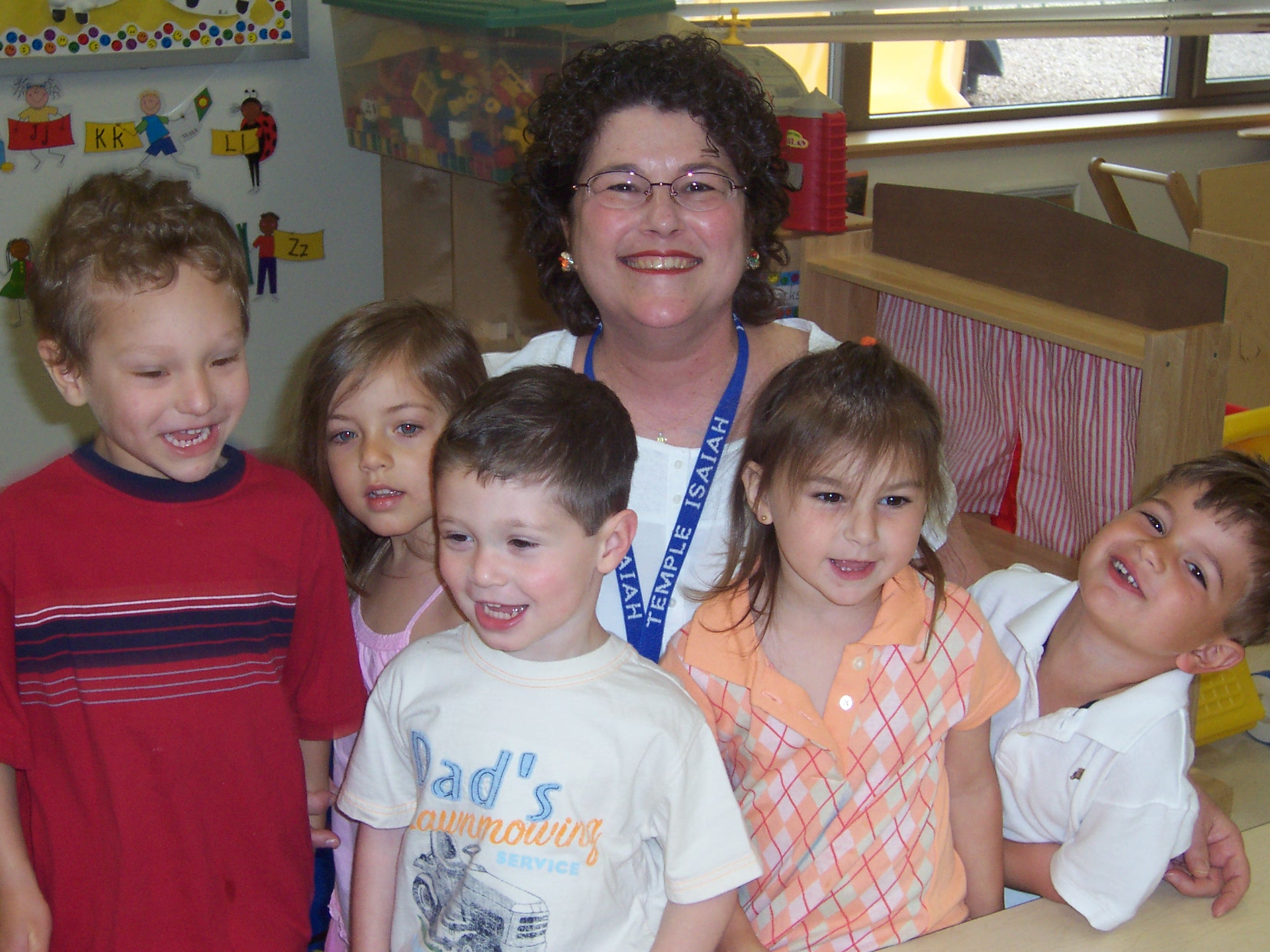 During Jackie Norden’s presidency (2004–06), we transitioned into our new temple home. We celebrated the dedication of our building and reaped all of the benefits of being able to worship in our own sanctuary, as well as offering numerous new programs to congregants of all ages. The first two years of our preschool’s existence were extremely successful, with enrollment nearly doubling during that time. The Religious School instituted an important program to provide services to children with disabilities. In addition, the Religious School made tremendous strides in its push for social action projects.

During the Presidency of Ben Sandler (2006–08) the temple’s focus was centered on a sense of congregational community and attending to securing its financial future. The Matzoh Ball Run’s successful expansion led to the creation of the Financial Assistance fund. A thorough financial review resulted in a revised long term financial plan with updated 5 year cash flow and budget projections. The temple acquired its Iraqi Torah and had year-long congregational study programs on “Jews in Arab Lands.” The annual High Holiday Food Drive began and in a lighter focus, the softball and basketball teams had their rookie seasons. During these years, Temple Isaiah held its first Purim Ball and first Matzoh Ball Cookoff.

Jeff Davis was president from 2008–10. He capably lead during a time of severe economic challenge, both to temple and its members. The Temple Isaiah leadership made a number of difficult decisions that put Temple Isaiah on a bright new path, financially and spiritually, for the future.  Long-term financial security was addressed by a new capital campaign that allows Temple Isaiah to significantly reduce its operating costs. Jeff’s Presidency was very rewarding; thru all the economic challenges, the temple never lost sight of its core values. 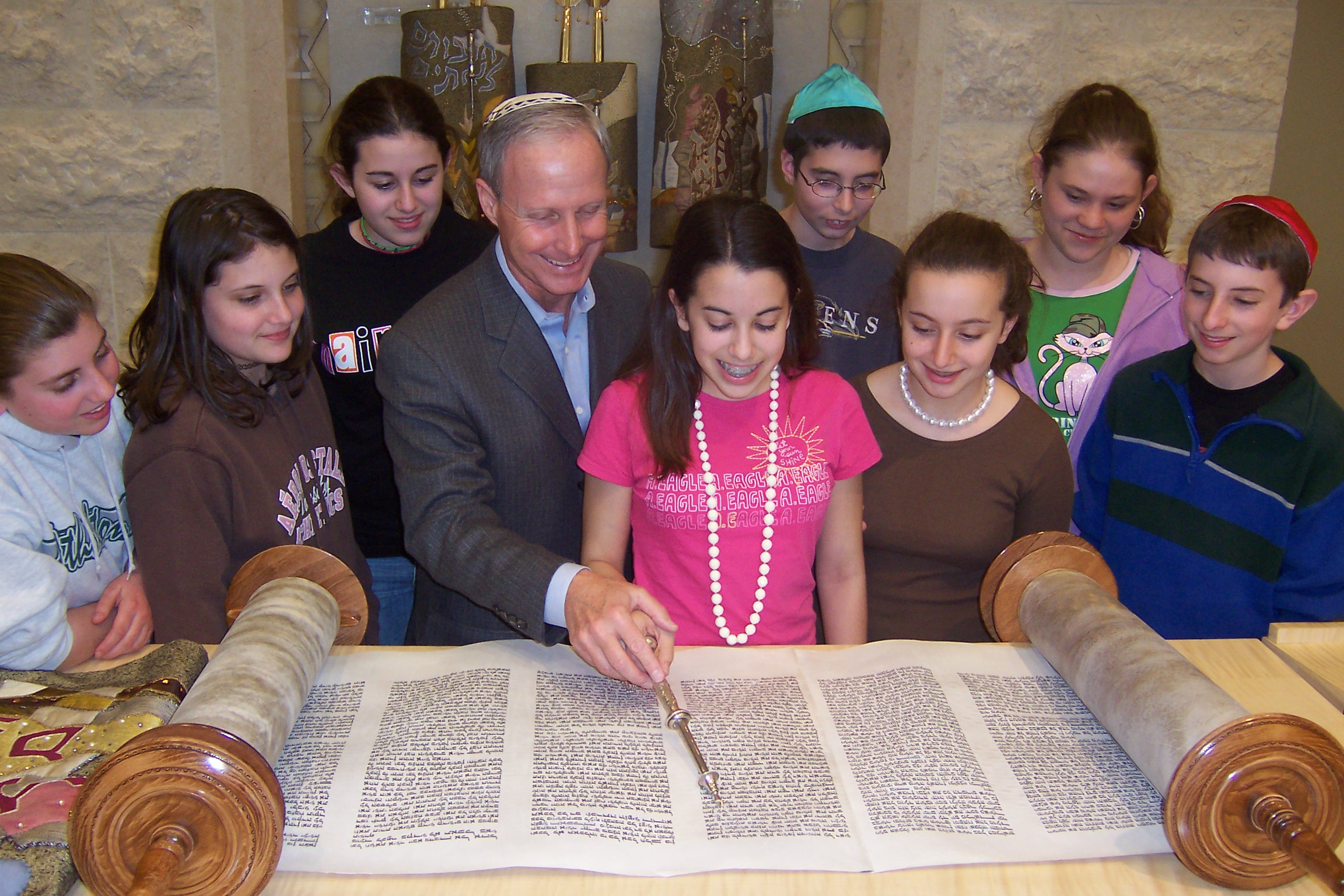 Phil Whitebloom’s term (2010–12) began as we welcomed our new cantorial soloist, Becca Grad, and our first Family Educator, Rachel Petroff Kessler. Joining the Men’s Club and Kol Nashim, the Sisterhood was formed and joined our very popular family of Temple Isaiah “auxiliaries” as the newest addition and our adult choir changed its name to Shir Isaiah. Temple Isaiah celebrated its 40th anniversary and Rabbi Panoff celebrated his 25th anniversary as Rabbi of Temple Isaiah and prepared the congregation for his retirement. 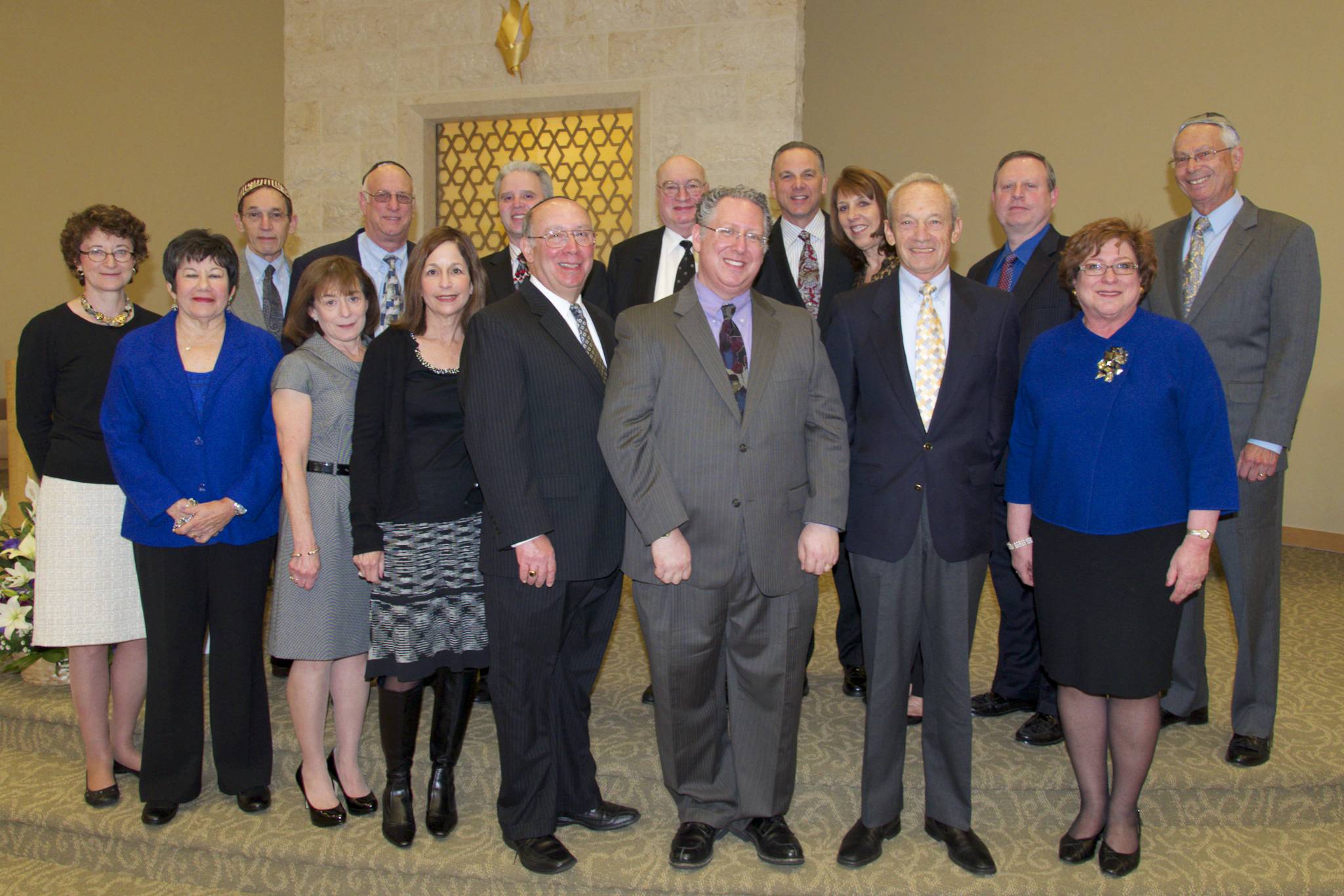 Denny Rapport (2012–14) guided the congregation through a time of tremendous transition as we welcomed Rabbi Craig Axler to become the third full-time rabbi in Temple Isaiah’s history. Additionally, as Rabbi and Renee Panoff retired, the Temple Isaiah Preschool was renamed in their honor and Amy Snyder took on the position of director. This period of transition was one of growth and developing a clearer vision.

During Larry Gordon’s presidency (2014–16), three long time staff members retired; our Temple Administrator, Director of Religious School, and Rabbi Axler’s assistant. Though the loss of their institutional knowledge and devotion to Temple Isaiah were not easily replaceable, the next generation of staff proved to be up to the task. Additionally, a construction project was completed to bring our gift shop, Isaiah’s Gifts, into the synagogue as well as expanding administrative offices for our Preschool. Temple Isaiah also continued to expand our social action programming to initiate a monthly meal for Grassroots Day Resource Center, Howard County’s homeless shelter.

Donna Kasoff’s presidency (2016–18) was marked by modernizing communication, increasing our security, and recognizing our congregants’ volunteer contributions. Our congregation continued to increase at a steady 4–5% per year, while various committees engaged toward constructive improvement: Our TI2020 task forces, especially the potential building expansion and adult education groups; our 50th Anniversary committee began planning for year-long events and our security committee brought about enhanced software and human security improvements. Our religious school participated in the URJ Communities of Practice pilot program. Our TI Preschool Director Amy Snyder retired and we were fortunate to hire Meredith Zuckerman as the new Director. We also added Raya Kridel to our staff as part-time communications coordinator. We also launched a new and improved Temple website.

Marshall Kohen’s presidency (2018–20) saw continued growth in the congregation and our positive impact on the Howard County community. During this time, the clergy and faculty made major enhancements to the pre-B’nai Mitzvah education program, and the Board made significant progress implementing “TI 2020,” a multi-faceted vision plan based on input from the congregation. The October 2018 terrorist shooting at the Tree of Life synagogue caused us to re-assess our already risk-appropriate security measures. The congregation said goodbye to retiring Administrator Helen Winoker, hiring Shelley Engel as our first Executive Director. The Board also approved moving forward on a significant expansion/repurposing of the Temple’s building. Perhaps most notably, in September 2019, Temple Isaiah began a year-long celebration of its 50th anniversary. The congregation held a number of well-attended, festive events into 2020, and had several more planned; unfortunately, the onset of the COVID-19 virus caused postponement of most of the 2020 events. True to form, in the face of the virus, the board, staff, faculty, and congregation demonstrated amazing creativity and dedication in maintaining personal congregant connections and as much normalcy as possible.