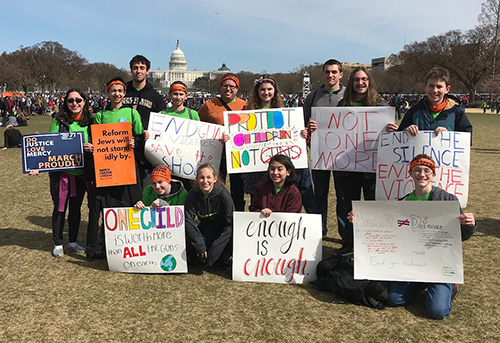 The March For Our Lives was a student run protest in Washington D.C. against gun violence. The events that pushed the students to create the protest were all the school shootings that have happened. During the march so much was happening, especially since more than 800,000 people showed up, helping to make a difference by showing American leaders that this was a cause they cared about.

The March For Our Lives was very fun because I got to be with my friends while supporting something I believe in. I was so excited to be participating, and I was happy to be helping create a safer future in schools and in the country. The whole crowd marched for a while, and then stood to watch some people on a large stage make speeches, sing songs, or tell stories of their experiences with gun violence. The speeches and stories were diverse in experiences, but were all connected because all the people were affected by gun violence in one way or another. Some people lost siblings, some lost friends, some were even in a school shooting.

Just hearing all the speeches, stories, and even reading some of the signs people made reminded me that this march needed to be done but it also made me wonder why it hadn’t happened until now. There was definitely a need for a major protest like this because innocent lives were lost during school shootings. I was grateful that students finally decided to organize this large protest and make a change instead of just hoping things will get better in the future.

Everyone at the march was passionate against gun violence and between every speech, song, and story the crowd would chant. Most of the time the crowd would chant “Vote them out!”, referring to politicians who wouldn’t work to fix gun violence and wouldn’t refuse bribes from the NRA. The chants were to say, “We are the people. We voted our leaders into office, and we can vote them back out.” Our leaders were voted into office to represent what the people want and there is no doubt the message we were spreading was heard by American leaders. There will be a major change and it will happen soon.