Ostrava and Its Jewish Community After World War II

Following the war and the liberation of Czechoslovakia, approximately 250 survivors of the Shoah returned to the region; these people tried to rebuild their lives and the Jewish community. Some were elected to the regional governments, and in the years after the war, Czechoslovakia supported the establishment of Israel as the Jewish State. That changed in 1948 following the coup that brought the communists to power, after which things again became inhospitable for Jews, although the communists helped train Israeli soldiers and sent ammunition to Israel.6

The conditions of the Czech Jews in the communist era took a significant hit from the Slánský Trial in 1952, when a number of communists of Jewish origin were charged with Zionism and other “crimes.” Many were expelled or arrested, and a small number were permitted to emigrate. The lives of Jews improved slightly after the death of Stalin, but the communists still maintained tight control on citizens activities.5

Currently, Ostrava is the third largest city in the Czech Republic, following Prague and Brno with a population of 313,088.6 However, it has only a tiny Jewish population of less than 100 people, many of whom are elderly survivors of the Shoah.

The official website of the Municipality of the City of Ostrava makes no mention of the Jewish community in its history, or the contributions of the Jews to the success of the city.10 Since Jews were active in government and were doctors, business owners, and architects who designed some of the major buildings in the early 20th Century, the omission is surprising. This makes research about the community that much more important. David Lawson of the Kingston Synagogue in South London has made it his goal to learn as much as he can about the Jews of Ostrava, publishing ‘Ostrava and its Jews: Now No-one Sings You Lullabies’ in 2018.8 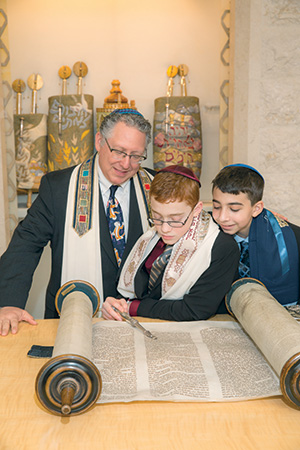 The Rudolph family has direct ancestral connections to Ostrava. One set of Lori Rudolph’s grandparents lived in Ostrava. Both families were well established and had comfortable lives in the city by

the 1920s, owning a major distillery which necessitated the import of fruit from British Palestine. It ultimately gave them the connections they needed to emigrate to England during World War II. Family members held positions as doctors, lawyers, engineers, professional musicians, and an architect. Unfortunately, the majority of the buildings the architect designed were destroyed by 1945. On March 14, 1939 as the German forces massed on the Czech Border, Lori’s grandparents received a phone call to let them know of the impending invasion and to tell them it was time to leave. Unfortunately, not all of the relatives were in a position to emigrate. Her grandparents left immediately but by this time the German troops had already crossed the border and they had to drive past them on their way to the train. In her Oral History at the US Holocaust Memorial Museum, a great-aunt tells the story of how she drove her brother and sister-in-law to the train station as the Nazis invaded, where they then traveled by train through Germany and Holland en route to England. The train passed through Nazi territory, stopping in Sagen in Prussia, Berlin, and finally getting to Amsterdam by March 17.

From Amsterdam, they were able to get a boat to England. Their desire was to emigrate to the US but they weren’t admitted immediately and had to spend at least a year in Ecuador before finally being allowed into the US.

Most of the extended family was taken to Terezín and then transferred to Auschwitz and other Concentration Camps. A great-aunt had to go into hiding as the Nazis began to round up the Jewish citizens of Ostrava. She joined the resistance and was able to survive until the liberation of Czechoslovakia. She stayed after the war and entered government service for several years until the communists gained control and put new limits on the Jews.

Like the rest of the Jewish society in Ostrava, many family members were murdered, a few left and survived, but almost none returned. Family members who were able to escape emigrated to Australia, England, Israel, and the United States. Several family members perished in the camps. Most directly were Lori’s great-grandparents, who were deported on the third transport to Terezín on September 26, 1942. They were murdered on October 22, 1942 in Treblinka. Although there were six synagogues in Ostrava, there is a possibility that Lori’s relatives may have read from MST #581 directly linking this Torah to the Temple Isaiah community.