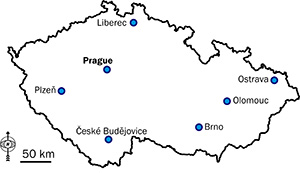 Ostrava and Its Jewish Community Prior to World War II

Moravká Ostrava (Märhrisch-Ostrau in German), currently known as Ostrava, is about 170 miles east of Prague. It is situated near the Polish border at the convergence of the Odra, Opava, and Ostravice Rivers. Prior to the First World War, Ostrava was part of the Austrian Empire, and mostly German speaking. It was a coal-mining and industrial town that grew significantly during the industrial revolution. Jews were not permitted to stay overnight in the city until 1792 and Jews were not permitted to reside in the city until the 1830s. Jews began to settle there in large numbers in 1848, when Hapsburg Jews were granted freedom of movement, and again after 1860, when residential and economic restrictions were lifted by the Emperor.2

During the late nineteenth century, the Guttmann Brothers established coal mines, and the Rothchild Family established the Vitkovice Mining, Iron, and Steel Works.

This led to a large influx of immigrants, including Jews from the region. This increase in population resulted in the need for schools, medical facilities, housing, synagogues, hotels, cafes, and shops. The economy in Ostrava was prosperous and it was a socially progressive, technically advanced, tolerant, and multi-cultural city. Jewish men and women held positions as doctors, lawyers, engineers, and politicians.

By 1937, the city of Ostrava had six synagogues, and had the third largest Jewish community in Czechoslovakia behind Prague and Brno, with a population of approximately 10,000 Jews.

After the Munich Agreement in September 1938 and the events of Kristallnacht in November of the same year, many residents with connections outside of Czechoslovakia made arrangements to leave. On March 14, 1939, Ostrava became the first city in Czechoslovakia to be invaded by the Nazis, one day before Prague. They invaded Ostrava in order to take control of the coal mines and steelworks. By June, all six of the synagogues in Ostrava had been destroyed, and in October 1939, the first Jews from Ostrava were deported to Poland. The deportation was not fully supported in Ostrava, with opposition voiced by Mayor Josef Hinner. He even started a resistance to smuggle Jews out of the area. Unfortunately, Mayor Hinner was also deported to a concentration camp where he barely survived to the end of the war.3

Terezín was designed to divert the attention of the world from the death camps such as Auschwitz and Treblinka. It was “beautified”; musicians were given instruments, artists given paints and canvas, and the camp was showcased as a “model Jewish settlement” to the Red Cross in 1944. Unfortunately, more than 155,000 Jews, including 15,000 children, passed through this camp on the way to death camps. The Soviet army liberated the camp on May 9, 1945.4

The Nazis almost completely destroyed the Jewish population in the region. About 85% of the Czech Jews were killed in the Shoah. Of the 10,000 Jews in Ostrava before the War, few returned.10 Almost no physical evidence of the Jewish community prior to World War II exists in Ostrava. “The scale of this destruction makes the few fragments that survived so much more important.”5