In 1942, the brave staff of the Jewish Museum in Prague persuaded the occupying Nazis to store religious items and Torah scrolls from the Jewish communities of Bohemia, Moravia and Silesia. They sent letters to the communities requesting that they send their religious items and Torah scrolls to the museum for safe keeping, believing that they would be saving the communities themselves. According to The Museum of the Jewish People at Beit Hatfutsot, “348 ritual objects, 680 books, and 246 documents from Ostrava’s Jewish community were sent.”11 The Jewish curators for the museum meticulously catalogued and numbered every item, with the goal of reuniting the items with their communities as soon as it was possible. Once the cataloguing was complete, the curators were sent to concentration camps where most of them perished. The Torot were sent to the Michle Synagogue outside of Prague and forgotten, while the rest of the items were stored at the museum. More than 150 Jewish communities in Czechoslovakia were destroyed during the Holocaust, but Prague was spared. The collection of Jewish artifacts, stored during the war in more than 50 warehouses,12 survived the Shoah but very few members of these Jewish communities survived or returned. After the war, these items did not have a home to reunite with and in many cases these items are all that remain of theircommunities.

In 1963, the Communist government in Czechoslovakia tried to sell the Jewish items to Jewish communities abroad to make money. Erik Estorik and Ralph Yablon, art collectors, purchased the 1,564 Torah scrolls in January 1964 and sent them to Westminster Synagogue in London. A memorial and museum were established to care for these torot under the Memorial Scrolls Trust (MST)1. Due to two decades of neglect and being stored in the damp basement of the Michle Synagogue, most of the rescued scrolls were damaged. More than 50 years later, many of the Torot have been distributed to congregations on “permanent loan” around the world. The Trust forbids selling or transferring the scrolls should a congregation close, and the Trust requires the scrolls to be used if possible, or displayed if not. They cannot be buried as would be customary; they are to be available to commemorate those communities. They help us remember entire communities that perished in the Holocaust, but quietly they give a message of hope and resilience. These scrolls have been given a second life.

In 1982, Temple Isaiah congregant, Ms. Sylvia Singer arranged for a Torah from the MST to be entrusted to our congregation. Our Sefer Torah, number 581 in the Memorial Scrolls Trust collection (MST), is one of fourteen rescued from Ostrava, in what is now the Czech Republic. We do not know from which of the six synagogues in Ostrava it originated, but the certificate that accompanied MST #581 indicates that it was written at the end of the 19th century. It is the directive of the MST for those granted a Torah to learn about its origins, and to connect to the Jewish community that once thrived there. It is the wish of the Trust to connect the more than 1,000 Scroll guardians to the MST and each other, thus ensuring the continued sharing of information around the world, particularly so the communities they came from, the people, and the Shoah will never be forgotten. 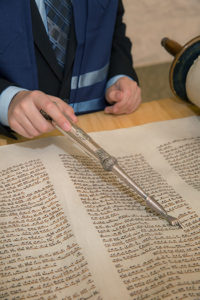 The Temple Isaiah congregation reads from the Ostrava Torah on Yom Kippur afternoon, on the Shabbat closest to Yom HaShoah, and for our Confirmation Class on Shavuot. In 2018, it was also read on Kristallnacht. It has, on occasion, been read on Shabbat by a Bar or Bat Mitzvah.